Broughton House is a property of the National Trust for Scotland and is located in the middle of a smart street in the little town of Kirkcudbright. The house itself was the residence of the artist Edward Atkinson Hornel, who was active as a leading Scottish artist in the early twentieth century. It is a Georgian house with an Edwardian extension. Hornel had a great passion for his garden and was inspired by Japanese gardening style. There are still some of his plantings remaining in the garden, including tree paeonies and Hydrangea petiolaris.

Although we had one and a half hours available to view both the house interior and the garden, I spent all my time in the garden and didn’t make it into the house. There was so much of interest to see, and we spent enjoyable time chatting about plants with the new head gardener Michael Jack.

At the back door there were veratrums, hostas and polygonatums – all free of slug damage. Many attractive large ferns were also dotted around. Moving down the garden there were numerous garden rooms of various shapes and feels, all filled with lush perennials and shrubs, including an excellent paeony bed.

On the right hand side of the space there was a high wall giving that lovely sheltered feel of a walled garden. Here were to be found astrantias, campanulas and geraniums of various blues and pinks. There was also a tall pink plant with pink spikes, reputed by fellow hardy planters to be a phytolacca.

Many of the beds were edged by a low hedge of golden yew, which had been drafted in to replace the blighted box hedging. I thought it looked very effective and I presume it must be even more striking in the winter.

A greenhouse had been constructed in Hornel’s time but this was finally destroyed by gales in 1998 and had to be rebuilt. It is currently used to house a collection of pre-1933 pelargoniums of which my favourite was Pelargonium ‘Garten Direktor Hermann’ which had upper petals of dark pink and lower ones white – very attractive.

The back of the garden overlooks a tidal sea inlet, the planting being arranged to allow a lovely view. Here there is also a vegetable garden and storage area where we spotted a pile of bags of ‘Strulch’, a commercial mineralised straw mulch which is claimed to enrich soil and to act as a deterrent of slugs and snails. Maybe this was the secret of the lush, damage free foliage we saw growing healthily all around us.

My favourite plant was the lovely little Roscoea cautleyoides gathered in clumps near the pond area, with pure yellow flowers and at its peak on the day we visited. It is a member of the Ginger family which has the gorgeous name Zingiberaceae. It sat well in this peaceful and well-tended haven of beautiful plants.

The initial impression for our group of North Eastern gardeners, used to cold east winds, was astonishment at seeing so many large shrubs blooming happily outdoors, lots of them ones we struggle to grow well even in frost free greenhouses. What I thought must be Prostanthera cuneata turned out to be Prostanthera lasianthos and there was also Prostanthera melissifolia.

There was a stunning specimen of Olearia ‘Henry Travers’ at its glorious best. The area round the house is full of southern hemisphere shrubs which are difficult to grow even in this part of South West Scotland, notoriously very mild and wet. Our host on the day, Rob Ashbridge, himself a well-known local nurseryman, said even he had problems a few miles away.

The garden was created by Alan Shamash who has a love of rhododendrons, camellias, hydrangeas and rare Southern hemisphere plants, many obtained via Edinburgh Botanic Garden. The plant experts in our group confessed themselves stumped on several occasions while walking round the garden, seeing new things always adds a thrill to a visit.

A magnificent mosaic wall, created by the owner in memory of his daughter, gives personality to the garden.

Rob is working with Alan to add new developments and to record and label the plants with an objective of opening the garden in aid of charities including the Kirkcudbright Hospital league of Friends.

There can be few people who do not respond to the very particular atmosphere of a walled garden. Feelings of peace, tranquillity and calm within the enclosed security of walls were evident in plenty as we entered the world of the Shambellie Walled Garden.

Imagine, if you can, how Sheila Cameron felt as she set out to find the garden that she was not at all sure existed and almost not being able to find one until, by chance, she caught a glimpse of a finial amongst the heavy undergrowth which led her, in Dr Livingstone-style, to machete her way through to what eventually became clear was a walled garden.

The walled garden had been fully functioning for two hundred years until falling into decline & neglect in the 1950’s. It had been famous for its apricots and still has an impressive stretch of camellias that would have been growing under glass in a specific camellia house. 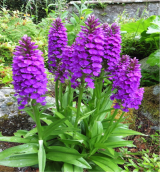 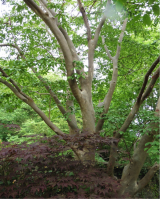 Twelve years ago Sheila Cameron single handedly, took on the lease for the garden and set about to clear the site of trees, brambles and every other plant thug.

The garden she discovered took 10 years to find -10 years of unbelievable toil that was kept going by her deeply held belief that the garden was so worth restoring and giving back to it its heart and identity and to then be able to leave it for future generations to cherish and enjoy. 3000 trees had to be removed and every stone and weed ejected by Sheila was then replaced by her with new beds and paths and every single plant put in by her. It is little wonder that she feels a tremendous oneness with every piece of the garden. The garden we see now is the most beautiful and bountiful mixture of plants laid out in long wide borders amongst grass stretches.

The entire garden reflects the feelings of love and commitment that have gone into it. An eclectic mix of plants from herbaceous stalwarts such as campanulas and nepetas to choice shrubs of cornus and corners of rich shade planting with bamboo, acers and hostas and Dactylorhiza orchid give plenty of plant interest.

The only plant that was retained in the garden gave us pause to think what its identity was. It is now a large tree planted in one of the corners by a member of the family that owns the house – thereby a clue!

The family were the Stewarts and this tree with its beautiful smooth eucalyptus type bark and what looked like seed pods but were in fact masses of flower buds was… a Stewartia.

The future of Shambellie is in doubt; it is now such a big project it needs more that the strength and effort of one woman. It has become a really meaningful garden to many people and it would be a great tragedy if a way forward that meant the continuation of the garden as it is now could not be found. It was a beautiful visit for us all and we wish her all the very best for continuing into the future.

Well, there is nothing like agreeing to be flung in at the deep end. Recent naïve member, first garden visit on first garden tour and offering to write up a visit. The eminently sensible Maggie Duguid suggested I do the first one and get it out of the way so here we go. First stop in the sunshine was at the aptly named Bridge End Nurseries, (bridgendnurseries.co.uk) snuggled at the end of a bridge about a mile and a half from Gretna Green.

This is both a garden and nursery divided into three main sections adjacent to the owner’s house. We entered into the first section which were mainly herbaceous beds showing the range of plants available to purchase in the nursery, together with stock beds and greenhouses. The beds were well set out and labelled, with the plants shown off to advantage with some nice colour combinations, for example purples and mauve centaurea with splashes of bright orange geum. I was very attracted to the metallic blue of a well established Eryngium x zabelii ‘Forncett Ultra’ which was quite dense and at about 3ft. is not too tall for my windy garden, so I bought one; only to be quickly followed by the purchase of Galega ‘His Majesty’ for a more shady area of the border.

The second area was built around a caged pond for rare wildfowl shaded by a large willow, with plenty of seating to sit and watch their antics as well as the many birds feeding at stations around this area. Perhaps the ducks were one reason the many hostas did not resemble doilies and there was a good range of geraniums in this area, with Geranium ‘Thumbling Hearts’ standing out.

Through a stone archway into the third area which, as well as showing herbaceous beds with plants in pots, a large rockery slope abutted the roadway. The main bed was dominated by Crambe cordifolia which was given sufficient room to be shown in all its glory, and in one of the pots Echeveria ‘Duchess of Nuremberg’ was really doing her utmost with large pink bracts just calling out for attention.

Then too soon it was time to leave with the first of the many pink, yellow and white poly bags bursting with purchases carefully stowed in the boot of the bus by our delightful driver, Alan. Judging by the long queue at the selling point members had found plenty to interest them.

On reflection this was good place to begin our tour with some nice plants available to buy while the gardens just got better and better.

I knew beforehand that this was not the usual Hardy Planters Garden so I was a bit curious about it. Some of our group were handed a map/explanatory leaflet when we arrived at this garden, but as I got off the coach late there were none left. So I followed, crocodile fashion behind everyone else down the path as instructed by the Head Gardener. We loped past some perennial plantings, noting iris, meconopsis and so on, nice but not unusual. But eventually, through a gate, we saw a vast expanse of undulating land ahead, nothing like a garden as I understood it, and although at first it could have been taken for hilly territory suitable for sheep grazing, I soon noticed that things were not as they seemed. 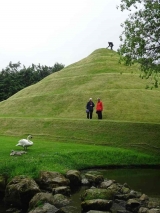 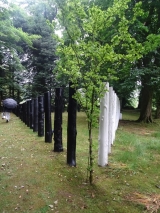 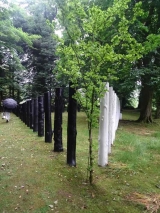 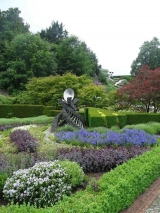 Wikipedia tells me that this garden is all about science and mathematics but that had gone way over my head, literally and figuratively! In the short time we were there  I doubt that any of us could have seen everything in its 30 acres. It reminded me of an Alice in Wonderland puzzle, where none of the pieces made sense, nothing fitted and it was altogether otherworldly. I got lost, having passed a bridge that couldn’t be crossed, and when I found one of our group, I managed to wrench a copy of the map, but it didn’t make sense either, and I wasn’t the only one lost down the rabbit hole!  But we followed each other trying to find out where we were, and in the course of it discovering strange snail structures and interesting earthworks and steps that couldn’t be reached.

It has taken a whole book to interpret the meaning of this garden, so it’s unlikely I will be able to summarise it here!  Without the philosophy explained, I discovered many pieces on my short voyage of discovery and left the sculptural works none the wiser, but feeling I had experienced something entirely enigmatic.