We set off for the Nursery only 8 miles from our hotel in pouring rain, but as true gardeners, knowing that there is no bad weather just bad clothing, we were prepared and undaunted.

Famous for her violas and other cottage garden plants, we quickly set to searching the tempting rows of plants, as only Hardy Planters on a mission can!

As well as her violas, Elizabeth MacGregor has a good selection of Anemone, Eryngium, Iris, Thalictrum and Crocosmia, many her own selections.

I found a new Thalictrum ‘White Splendide’, said to be a hybrid between Thalictrum delavayi and Thalictrum elegans, tall and long flowering. Just what I was looking for!

I thought Geranium ‘Blushing Turtle’ (where do these names come from!) was worth a try, a new cultivar from a Canadian breeding programme for repeat flowering ground cover. Not sure about the ‘ground cover’ but will let you know. I did buy other plants too of course, as you do.

The walled garden was an absolute delight – colour themed to great affect with generous clumps of plants available in the nursery.

Gorgeous iris at their best, violas, geraniums, roscoas and many others, creating a very atmospheric and beautiful place, even in the rain, and definitely my favourite of the trip – I think!

What a pity that some of us preferred to sit under cover enjoying coffee and homemade cakes rather than explore this lovely garden. I missed having cake, but wouldn’t have missed that garden!

On the outskirts of Kirkcudbright was the garden of Carolyn and David McHale surrounding a modern house. As the name indicated there was a row of mature lime trees but these did not overshadow the garden which was set away from them.

At the entrance to the garden were three Katsura trees (Cercidiphyllum japonicum) which together with a good stand of pale yellow Meconopsis nepalensis informed the visitor that the planting would not be obvious or predictable. 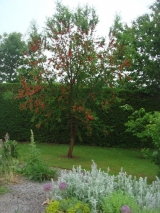 The garden was spacious with a wide lawn between the rock garden by the house and the gravel border further away. The lawn had once been a tennis court and the owners had made a virtue of necessity. The rock garden contained many fine plants including large specimens of Dactylorhiza.

The gravel border hosted grasses and phormiums, alliums and stachys whose lightness and airiness contrasted with the solidity of a striking vase shaped slate sculpture by Joe Smith. It added up to a fine effect which caught the eye from many parts of the garden.

Close to the gravel border in full flower was a large Chilean fire bush, Embothrium lanceolatum which must have been five metres tall. Its size and health made one envious: perhaps not to be tried in the North East of England. A woodland bed contained three silver birches, a deep purple Sambucus ‘Black Lace’ and a Cornus controversa variegata as a background to glaucous Thalictrum and pink Meconopsis.

The vegetable garden was neatly managed in raised beds. Next to it were fine specimens of white Wisteria and Abutilon vitifolium album and white bladder campion (Silene). There was a double white and pink Clematis montana called Marjorie.

Behind the scenes – and behind the hedge – was an impressive array of compost bins and leaf mould containers. It was apparent that David and Carolyn did not let anything go to waste. They were gracious hosts and we thank them for their kindness.

The final garden visit on our wonderful trip was to Drumpark, near Irongray.  It was originally owned by a former Liverpool corn merchant, Francis Maxwell, who built a baronial home (now demolished) on the site in the mid 1860’s. Maxwell followed the fashion of his day and planted species trees imported as seeds from North America, including Wellingtonias (Sequoiadendron), Japanese cedars, monkey puzzles, cypresses including the rare Spanish fir, Abies pinsapo.  British trees were not neglected and a superb collection of chestnuts, oaks and yews are the result.

His successor, Duncan Kaye, an East India Merchant, continued to develop the garden, and he was responsible for the species rhododendrons that adorn the section of the garden known as the ‘policies’, many of which were planted in the 1870’s.

The modern layout was the work of Mary Mitchell who worked on the garden from 1948 until her death in 2008, though the garden was neglected in her latter years. Inherited by her daughter and son-in-law, both keen gardeners, the present garden was opened again for charity, after 4 years intensive work, in 2012.

There are long borders and island beds around the house, planted with many perennials and some shrubs including clethra, gaultheria, philadelphus and viburnum. Nearer to the house is a range of camellias, Coreolopsis pauciflora and Choisya ternata.

To the west of the house is a steep wooded area which terminates in the rock garden. This area has been cleared and replanted in the last few years with rhododendrons including thomsonii, Loderi and cinnabarium, with an underplanting of mostly astilbes and montbretia. There are also several old roses (yet to be identified), rugosa and kalmias.

The walled garden dates from 1864 and continues to be used as a vegetable, fruit and cut flower garden. The old apple trees are gradually being pruned and new plantings of pear, plum and soft fruit bushes promise an abundance of produce for the future. The west and south facing walls of this garden are adorned with roses, mostly in bud for our visit.

My particular favourite was the water garden which has been created around three ponds linked by burns. It sits in a natural bowl in the centre of the garden. Meconopsis abound, with prolific plantings of primula, astilbe, hostas and lilies. There are also cardiocrinums – giant lilies – which grow up to 7ft tall. They take more than 10 years to flower from seed. Close to the middle pond are 2 cercidiphyllums and a spectacular snake bark maple and the pond surrounds are well planted with pieris, magnolias and small leaf rhododendrons.

Plans for the future include a woodland walk through the policies and further work on the arboretum hybrid rhododendrons which need some careful pruning and reshaping to return them to their former glory.

This visit was a fitting end to our HPS trip and will be worth re-visiting in years to come.